Father Ray Klees was born on February 21, 1947. He was ordained on May 9th 1973 and served many parishes in the Archdiocese of Chicago. St. Cletus was lucky enough to have him as pastor from 1992-2006. He was appointed as a temporary associate on April 1, 1992 until he was appointed full time pastor by Joseph Cardinal Bernadin on July 1 of that same year. He made a plan and outlined the goals for the parish and school in areas of spirituality, personnel, financial management, and general morale. A major capital campaign was initiated in 1994, and asked one dollar a day extra from every parish family for four years. A total amount of $1.8 million was raised and spent on outstanding debt, capital improvements, large infrastructure, repair, and the school endowment fund.

Patriotism was close to Father Klees’ heart, due in part to his father being a veteran. He helped grow our 4th of the July mass in to the beautiful gathering we enjoy today. Each year he loved introducing each branch of the military as their anthems were played during the mass and always expressed the importance of honoring the men and women of the military who help protect us each and everyday. One year we even had the honor of a fly over following mass! Following the attacks of 9/11, Fr. Klees and the parish honored first responders at a special service each year. 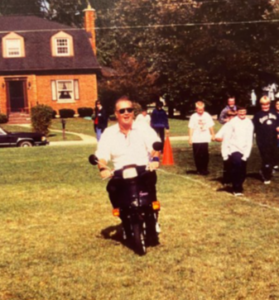 Father Klees not only immersed himself in our church, but he could also often be seen roaming the halls of our school speaking with our students and getting to know them better. He would often enter a room doing the sign of the cross and said it was the best way to get a room full of Catholics to quiet down and pay attention…and it worked! You could often see him on his Vespa which always caught our students attention. Once he even rode it in to a school mass! Something we are sure our students never forgot! He enjoyed attending the 8th grade Washington D.C. trip with our students and would have his video camera with him capturing special moments throughout the trips! Following those trips he would come show the 8th graders some highlights! Golf was also a love of Father Klees and he enjoyed attending the 8th grade golf outing each year and teaching our students the ins and outs of golf. He loved the school kids and helped us all create a strong faith and wonderful memories.

It was always clear to see the great passion Father Klees had for priesthood, the Catholic faith, and a Catholic education in everything he did. Msgr. Kenneth Velo, archdiocesan priest and senior executive of Catholic Collaboration for DePaul University who knew Father Ray Klees for over 60 years said, “I can attest to his great love of people and priesthood. He has been in varied ministries, and always brought great devotion and enthusiasm to his work. He will be missed.” 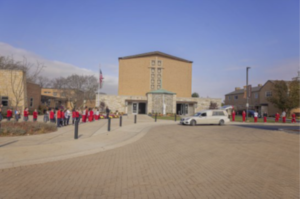 Following his funeral mass our school children surrounded the church to honor him as he exited St. Cletus for the final time to be laid to rest.

His funeral Mass stream can be found on our YouTube channel.

St. Cletus is a dynamic Catholic community dedicated to spreading the Good news of Jesus Christ through worship, education, and service. We encourage all to live the Gospel message of Jesus Christ in their daily lives, by sharing their talents and faith with our parish and community.