A New Catholic Church for a Growing Community

In July 3, 1951 Father Gerald J. Morrissey was commissioned by Cardinal Stritch to form a new parish in the rapidly growing southern section of La Grange and Western Springs. The 440 Catholic families in this territory were being served by St. Francis Xavier Parish. After months of survey, a site for the parish was chosen on the north side of 55th Street between Spring and Stone Avenues. The new parish was canonically erected by the Cardinal Archbishop on October 5, 1951 under the title and patronage of St. Cletus, Pope and Martyr. The newly erected United Auto Workers Civic Enter at 55th and East Avenue provided a temporary home for St. Cletus Parish. On October 21, 1951 some six hundred worshippers attended the first parish Mass in the Union hall. 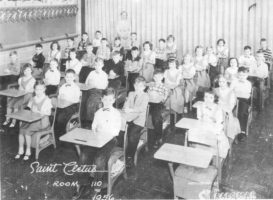 The first building, designed by Mr. Thomas E. Cooke, A.I.A., consisted of a temporary church seating 450 people and two wings containing eight classrooms, a kindergarten, music rooms, and administrative offices. A convent was located on the second floor over the school. St. Cletus School opened in September 1953 with 412 students enrolled in kindergarten through seventh grade. Eight grade was added the following year and the first class was graduated in June, 1955. The Sisters of St. Joseph of La Grange have staffed the school from the beginning with Sister Mary Wilfrid serving as the first principal, until the Sisters were no longer able to staff the school any longer, in 1985.

The initial building was dedicated by Cardinal Stritch on April 24, 1954. Plans for the permanent church and rectory were drawn up, and ground was broken in July 1960 for the new church.

The first Mass was celebrated in the new St. Cletus Church on Christmas Eve, 1961 followed by formal dedication ceremonies on May 20, 1962 with Albert Cardinal Meyer presiding.

After years of fundraising, a new $4.3 million parish center was dedicated in August 2017.  The building features office space, Clark Hall (a modern gymnasium), Gallagher meeting rooms, and a concession stand.  The gymnasium and meeting rooms are named after retired parish pastors. 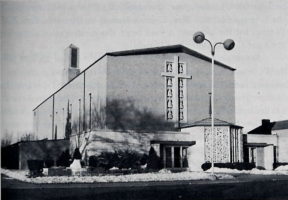 Since 1951, St. Cletus Parish has been served by several pastors.

St. Cletus is a dynamic Catholic community dedicated to spreading the Good news of Jesus Christ through worship, education, and service. We encourage all to live the Gospel message of Jesus Christ in their daily lives, by sharing their talents and faith with our parish and community.