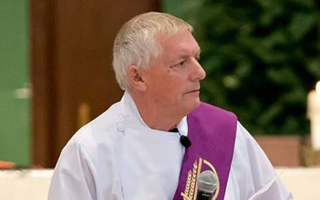 I love telling jokes and when I hear a good one I tell it often – and with the repeated telling it gets embellished, and in my opinion – better.

However, Marlene who likely has heard the joke several times before usually rolls her eyes and says “Just get to the punch line will you?”

The reason I mention this is that in Advent we started Cycle A of the church’s three year Sunday liturgy and we’re hearing Matthew’s Gospel.

Now both Matthew and Luke had the great advantage of having Mark’s available to them as they wrote theirs.

So we will hear or read Matthew referencing Prophecies in the Hebrew Scriptures which Jesus along – with his Mother Mary and Joseph – fulfil.

He adds to events written in Mark, embellishing and providing evidence and connections to those Hebrew Scriptures which we now refer to as the Old Testament.

Last week for Epiphany he quotes “And you, Bethlehem… from you shall come a ruler and shepherd to my people Israel”

Or the Prior week – Feast of the Holy Family – “Out of Egypt I called my son – He shall be called a Nazorean”.

For this reason The Gospel of Matthew is often called “The Gospel of the Church!” – It is the only Gospel that uses the word “Church” in its narrative, three times actually.

Matthew brings together the Old and the New to make the story of Christ’s life so compelling that we may believe and never doubt that Jesus Christ is the Son of God.

So you see a worthy embellishment of a story (or a joke ) is a good thing!!

Now getting back to the Gospel according to Matthew today!

Matthew tells us that at Christ’s Baptism – by John, the Heavens opened, the Holy Spirit descended like a dove and a voice came from the Heavens proclaiming:
“THIS IS MY BELOVED SON, WITH WHOM I AM WELL PLEASED”

But John was “Baptizing for repentance and the forgiveness of sins”
This seems very odd because Jesus was sinless!!

Indeed we heard about the exchange between John and Jesus – John telling Jesus he should be baptizing him.

But you see God’s purpose was to reveal Christ’s identity to John and the crowds – in a way that would leave no doubt in their minds who Jesus was, is and ever will be. THE SON OF GOD!!

Matthew writes that Jesus response was “ Allow it now, for thus it is fitting for US to fulfill all righteousness” – meaning – what had indeed been prophesied in the Hebrew scriptures was fulfilled with Christ’s baptism.

Here again we have Matthew connecting Jewish Scriptural prophecy with the events in the life of Jesus.

In this moment as Jesus was Baptised by John – God sanctifies the very act of Baptism – With Water and The Holy Spirit.
The early definition of Baptism, when translated from the latin is;
“ The Gateway to Spiritual Life”

It is a dying of a former way of life – now living for God and in the ways His Son taught us.

In the Second reading today, from Acts, we heard that Peter preached how after God had anointed Jesus at his Baptism – he went about doing good and healing all those oppressed by the devil – for God was with him!!

And as a side note – while not included in today’s reading from Acts – God has revealed to Peter – thru Jesus – that baptism is for all and being the first equal opportunist he Baptises Cornelius – a Roman Centurion – the first Gentile to be baptized!!

So Christ’s Baptism was the start of his very public profile and earthly ministry!!

I tell the parents that these precious little ones are being baptized into the Catholic faith which brings with it an awesome responsibility for them.

Firstly I explain its called faith because it means believing what we cannot see, touch, prove, experience and we are expected by virtue of our own Baptism to live by the teachings of Christ and His Church and raise these little ones accordingly.

Secondly, Baptism is a great start to their children’s lives BUT it’s only the start, because it will then be up to the parents and family to affirm this faith by their example.
I don’t actually say “That means regular attendance at Mass because I hope they can make that connection” but such attendance is critical for the child’s well being!!

Well – Let me summarise an article in the Wall Street Journal about a month ago entitled “DON’T BELIEVE IN GOD ? LIE TO YOUR CHILDREN”

It was written by Erica Komisar – A therapist dealing with children and young adults suffering from depression and anxiety.

She explained one of the most important explanations for the incidence of mental health issues among this age group today – and perhaps the most neglected – is the declining interest in religion, which has already proved disastrous for millions of vulnerable young people.

She quoted a 2018 study by Harvard University which looked at how being raised in a family with religious or spiritual beliefs affects children’s mental health.

The result – Children or teens who reported attending a religious service once a week scored higher on psychological well being tests and had lower risks for mental illness. Additionally they had higher rates of volunteering, a sense of mission, forgiveness and lower probabilities of drug use and early sexual initiation.
Sadly as we know attendance at formal religious services continues to decline and indeed a recent American Family survey found almost 50% of adults under age 30 don’t identify with any religion!

Such nihilism is the fodder for anxiety and depression.

And so to the title of the article!

Erica notes that when asked by parents how they should talk to their children about death when they don’t believe in God – She tells them – Lie!!

Yes break the 9th Commandment !!
Why?

Because, she notes, a belief in Heaven and life after death helps them grapple with tremendous and incomprehensible loss – and in an age of broken families, distracted parents, school violence, the latest TV news – such imagination helps them cope.

I encourage you to get this message out to your families and friends with young children whose attendance at a religious service has lapsed – and if their children have been baptized it’s actually what they signed up for after all.

And they don’t need to take my word for it – tell them to read the science.

1) Children and young people benefit greatly, both emotionally and spiritually from being a part of a family that regularly attends a religious service.

3) Embellishing a story (or joke) can be a very good thing as Matthew clearly demonstrates with his Gospel writings.