A few weeks ago Marlene & I went on a trip to England & Ireland, the highlight of which was a pilgrimage to the “Knock Shrine” – Full title being “The Shine of Our Lady of Knock, The Queen of Ireland”

Marlene had, for sometime, felt drawn to visit this Marian Apparition site but wasn’t sure why, however, the pull was irresistible and so we went. It would be fair to say that “Our Lady of Knock” is a lesser known Apparition relative to Lourdes, Fatima, Guadalupe (see later ) but nonetheless of very great significant, especially to the people of Ireland.

A brief history of the Apparition at Knock Co. Mayo, Ireland

On the evening of Thursday August 21, 1879, at around 8.00pm,( it was raining heavily – imagine that in Ireland !!), when Mary Byrne and Mary MCloughlin, who were walking home came upon an amazing sight, it stopped them in their tracks. Mary Byrne ran home to tell others who also gathered to view the miraculous site on the gable end of the parish church. It was the Apparition of Our Lady together with St. Joseph and St John the Evangelist and a Lamb on an altar suspended by angels behind which was a large cross.

Various accounts, 15 individuals in total, were recorded by a Commission of Enquiry which concluded that the testimonies were valid. It is recorded that this small group of people knelt in prayer, in the pouring rain for two hours.

They individually told the commission that Mary, who stood a few feet above the ground as with the whole apparition, was wearing a white cloak fastened to the neck and a brightly lit crown with a single rose.

More details are available but suffice to say that all witnesses noted in spite of the weather, the area of the apparition remained completely dry.and bathed in golden light.

A few interesting facts about this apparition

The reason seems obvious – she wanted to encourage the people of Ireland, predominantly Catholic, in their struggles. At this time Ireland was part of Great Britain and much of the country was owned by absentee “British” landowners. Most cared little for their Irish tenants, only that they paid the rent in a timely fashion, regardless of the impact of the seasons on their crops. This led to the truly miserable conditions eloquently described by Tom Neary in Chapters 1 & 2 of his book “I Saw Our Lady”.

Some forty years later Ireland would be divided into Catholic South and Protestant North and I would suggest that the Mary’s Apparition gave the Irish Catholics the impetus to separate from mainland Britain, and although this is my personal view – t it seems consistent with facts and circumstances of the events in Knock, Co Mayo, Ireland some 140 years ago.

The opening lines of the “Prayer of our Lady of Knock” are:

Our Lady of Knock, Queen of Ireland,
you gave hope to your people in a time of distress
and comforted them in sorrow

As Marlene & I reflected on our visit, Marlene said she believed she felt now she understood that she was drawn to Knock and given a mission to tell the story which is so little known (outside Ireland).

So this is the first part of that mission – enjoy.

Second Part – We are considering taking a group to Ireland for a week or so next September, the highlight of which will be a pilgrimage to Knock Shrine. If you are interested please email me at sheyes@stcletusparish.com or call my cell phone 630 842 3967. 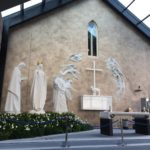 The apparition site with actual size figures and arrangement as described by the 15 witnesses. 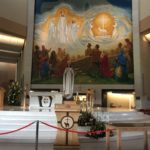 The Basilica at Knock