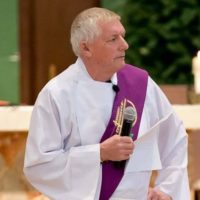 In his Notes last week Fr Bob referring to writings in the Acts of the Apostles – wrote about how the early disciples were conflicted about what they should do in the face of misunderstanding and even hostility AND what their identity should be.

Should they go outside their own communities and if so how should they interact.

Well this week in the first reading we hear their decision and the initial response from the gentile communities of Antioch Syria and Cilicia. They didn’t like Mosaic law being forced upon them, especially the requirement for circumcision.

As a result the disciples compromised for the church’s sake, prescribed a few laws which were acceptable and as we are here to testify the Christian church in the gentile world continued to grow for 2 millenia.

Not without its trials and tribulations, schisms, reformation, scandals etc.

So it has continued to grow as it adapted, the last major adaptation was Vatican 2 – an initiative to reflect the changing times and values, particularly post WW2 with the world having won the battle over the evil of fascism.

What came with that was  prosperity, and greater opportunities for the working and middle classes in the areas of Education, Healthcare, Housing, travel and personal freedom and lifestyle choices.

The baby boomer generation were out to change the the world they inherited – with their clothes, music, relationships etc

Those who met to craft Vatican 2 less than a decade earlier could not have imagined how the 70’s would unfold.

How Traditional religions would be discarded by vast numbers of subsequent generations.

Why have all these people defected from traditional religions and more particularly from our Church?

Because they no longer  share our values and beliefs.

Values – One of the non negotiables for the disciples was that the gentiles could not offer sacrifices to false gods- sadly today in the western world many worship wealth, status, power and position – false gods.

Beliefs – They have no tolerance for our beliefs:

Or the baker in Colorado to make a wedding cake for a gay couple.

Or forcing doctors and nurses to attend at abortions against their beliefs.

Or victimizing Karen Pence for wanting to teach Art at a Christian school.

Its a NO TOLERANCE policy in an intolerant society.

Free Speech !!   only if you speak freely in line with those who dismiss our traditional Christian values.

While I was pondering all this and today’s scripture readings I read “Chicago Flashback” in last weeks Sunday Tribune. –

The headline was “The Crash of Flight 191”  at O’Hare airport – 40 years ago this weekend when 272 people died in what was and still is the deadliest accident in US aviation history.

What is striking about this – the darkest day in US Aviation history is that from the ashes arose an understanding that the industry needed better protocols and oversight for building and maintaining aircraft and training pilots.

The safety record since is due to the enactment of such protocols.

The learning from this the darkest of days resulted in an incredibly safe and successful industry. – notwithstanding the recent tragedies with the Boeing 737 max .

The reason I mention this is that it kinda feels like the darkest day for our church in the modern era, certainly since Vatican 2.

To rebuild, renew, revitalize our church we need to listen to the voices of reason who in the best interests of the church propose :

allow the remarried and divorced Catholics to receive communion.

And a recent study showed that  about 50% of US Catholics believe we should welcome Gay Catholics into our communities.

I ask you this – What would Christ want for his church today ?

He guided his disciples with the Paraclete, the Holy Spirit, He still is guiding us and as a church we should listen to this Spirit.

Speaking of welcoming – A few weeks ago Marlene & I attended Parkview Christian Church in Tinley Park for the experience, – it was not an unpleasant or uncomfortable experience and the preacher was surprisingly fair and well balanced  in his comments about our church.

It’s a very large church, often more than 75 % filled at all of the 5 weekend masses AND of the registered parishioners more than 80% are lapsed Catholics FURTHER the majority are are in age range 20 – 50

Why is that? I asked the pastor after introducing myself .

He said “So many of these Catholics don’t go to mass any more because of our exclusivity – they feel unwelcome!!!”

That’s because they are – they are divorced, or remarried or gay or lesbian or enjoy contemporary music and singing.

And because of this often their parents, siblings  and friends also leave our church and join them.

We are so unlike the early church who addressed differences and became inclusive – following the model of Christ himself with tax collectors, prostitutes, lepers, adulterers etc.

Sadly I suspect I won’t see any of these changes i mentioned before  in my lifetime but we must adapt to a changing world as we did in the 1960’s with Vatican 2.

Is it time for Vatican 3 Pope Francis?

In the Gospel we heard Jesus offer his “Peace”  to all, not the enforced peace over the defeated seen after a victorious  war

BUT the genuine  peace of tolerance –

How far we as a society have moved from that model!!

God has never abandoned his church and he will not now BUT he expects us to do our part.

Unlike the early Christians we’re sure of our identity but like them we still face misunderstanding and hostility – as does the global Christian community as we saw as recently as Easter Sunday in Sri Lanka.

Offer Christ’s peace to all, be tolerant of all – even as they are not of you, be a force for change within our church.

Discussing Married priests, women deacons and inviting back to the table of Our Lord those who have been disinvited or even feel so,  isn’t heresy  – it’s a healthy debate that needs to happen  – just as did  the early Christians – The reading from Acts says:

“…there arose no little dissension and debate..”

Such is what needs to happen as The  Lord calls us to adapt to circumstances to continue to Build His church.

A Challenge – for sure

May the Lord’s Peace be with us all as we commit to moving  Our Church through these dark days.